I finally got my Analogue Nt with HDMI upgrade in the mail today and while the base Nt has already gotten plenty of coverage, the HDMI-upgraded model hasn't been covered at all (AFAIK) at the time of this writing.

I got the default silver model with the "limited edition" white and gold controller ports: 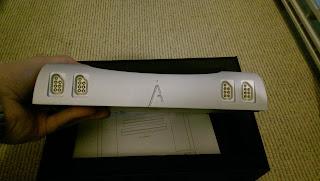 As covered elsewhere, the construction is incredibly high quality (the power/reset button being a button from an NES controller is a particularly interesting touch, I thought): 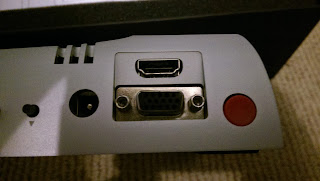 There has been much ado about the aluminum cart slots scratching up cart shells, which hasn't been a problem for me, but I suppose if you're really worried about it, you could open the flaps with a finger while inserting the cart. /shrug

Below the HDMI port is a standard 15-pin d-sub connector, which I've seen called a "VGA port" elsewhere, though this is not the case. That is to say: you can't hook it up to a VGA-compatible display and get any video out of it. For that matter, it's apparently not RGBHV-over-d-sub, either, as it didn't produce any picture when hooked up to my multisync XM29+'s d-sub port, even though that monitor will accept "240p" non-interlaced video over that connection. I'll have to catch up with the guys at Analogue and ask about the pinout of the port. Hopefully, it's something that won't require too much effort to get going on my own. I'm planning to hack together a SCART cable and a working RGBHV-over-d-sub cable (if possible). EDIT: I just talked to the Analogue guys and it seems the HDMI and RGB/component functionalities are mutually exclusive. It seems they will swap between the two at no charge, though:


"When you upgrade your Analogue Nt to HDMI it outputs HDMI only, there are two different systems that are not compatible with each other. Though, whats cool is you can switch between RGB and HDMI if you wanted either version (we'd install either daughterboard for you for free). Also, any other cool mods that the NES community may make in the future would be compatible with the Nt too - which is super cool!"

That in mind, I may decide to switch to RGB at some point in the future, as much of my equipment is tooled for RGB/SCART/JP21, but for now HDMI is convenient.

I won't rehash any more of the information that's readily available elsewhere, so instead I'll spend most of this post talking about the HDMI upgrade. While originally advertised as an external upscaler, they eventually nixed that idea (and rightfully so, since it's not likely they'd be able to get anything worthwhile for the ~$60 cost of the upgrade) and opted instead for kevtris' brand new HDMI board, which AFAIK isn't available anywhere else just yet.

I'm still doing testing to get a feel for what the HDMI board is capable of, but out of the gate: it's pretty incredible. The image is exactly what you would expect from an emulator, warts and all. That is, the upscaled pixels are as sharp as you can get; much sharper than the output of an XRGB-Mini Framemeister (which I also have, so I can give them the Pepsi Challenge): 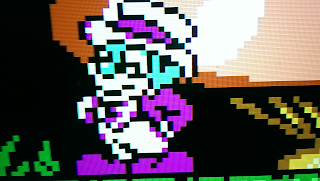 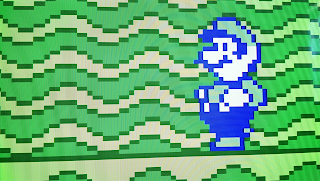 The colors in those shots are washed out, but that's the fault of my camera trying to adjust to the brightness of my TV's backlight. The colors are actually bright and vibrant, and the HDMI connection has none of the "shimmering" on large swaths of color that have been reported elsewhere with RGB connections.

Getting into the HDMI onscreen menu is pretty cool/crazy in that it's a button combination on the gamepad (specifically, dpad-down+select by default). Once there, it's got a ton of cool options for tweaking the video, including overscan cropping, horizontal scaling, scanline settings, scaling filters and resolution selection driven by your display's EDID: 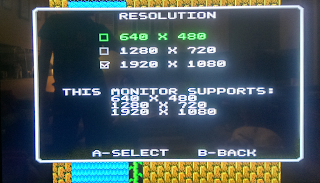 At 1080p, the scanlines are uneven thickness (alternating thinner and thicker), just like you would get on an emulator at 4.5x scale:
I would have liked to see an option to force integer scaling to avoid this issue, but I didn't see anything like that (I'll update this post if I find otherwise; such a thing may also be added in a future firmware update UPDATE: 9/26/2015 looks like kevtris is on it). At 720p, the scanlines are even thickness, since it's an even 3x integer scale already, but the pixels aren't as sharp due to my TV doing the rest of the scaling:
Likewise, at 1080p, the vertical size of pixels isn't consistent, just as you would expect from nearest neighbor scaling at a non-integer scale factor. This is also the case with the horizontal scaling, but there is an option screen specifically for tweaking it, from 3x (for 1:1 PAR at 720p) up to stretched 16:9 (barf). The default setting is 4:3 on 16:9 displays, which has faintly warped pixels but is the natural aspect ratio for NTSC:
There's also a preset for 4:3 on 16:10 displays, which is handy if you're hooking up to a monitor instead of a TV, as well as an option labeled "interpolation," but I can't really see any difference between it being enabled/disabled.

There are also scaling filters, including the ever-popular hq2x/hq3x/hq4x (no filtering vs hq4x):
The HDMI board also includes a lot of audio settings, with individual enable/disable toggles and volume/panning for main audio and each specific add-on audio chip for FDS audio and any in-cart audio add-ons, like the ones in Gimmick and Akumajou Densetsu:
There are a ton of other options I haven't gotten to play with yet, including hotkeys for over/under-clocking (presumably to get around some incompatibility with the Everdrive N8, which I haven't gotten to test yet), soft-reset and more.

UPDATE (8/30/2015): Looking into the Everdrive issue, it seems the N8 is indeed incompatible with kevtris' HDMI board with N8 firmware >= 4.0, while the 3.0 firmware may be okay. The Analogue folks uploaded a copy of the older firmware to their Dropbox account. Testing is easy, just copy and paste the files onto your SD card and replace the newer versions. Leave me a comment if you get to try it. I hope to borrow a friend's N8 soon, so hopefully I can provide some input/testing.

In addition to the N8 issues, Kevtris' HDMI board has been having issues with some games and mappers, the most popular of which is Castlevania 3. Apparently, holding reset while powering on the console alleviates some of the issues but this isn't an option on the Nt. Kevtris is working on it, though, and it should be addressed in the upcoming update. Update (10/30/2015): Kevtris' update is out and it apparently fixes the Everdrive green screen, FDS and MMC5. Anyone still having the Everdrive green screen issue can still apply the update from their Everdrive by powering on with the HDMI cable unplugged, wait a few seconds for everything to initialize and then plug the HDMI cable back in.

I plan to update this post as I learn more but I wanted to get this info out there, both for people waiting on their Nts and for those eager to learn more about kevtris' awesome HDMI board (for reference, it seems my board's serial number is 30, so I would assume it's one of the first to make it into an end-user's hands). 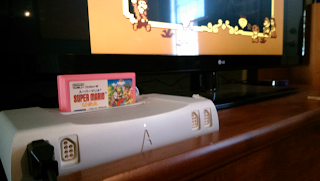 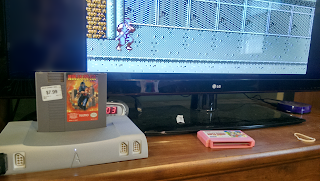 The "shimmering" you mention on large areas of color over RGB are caused by interference when using composite video as your source for sync. Switching to sync over composite sync instead of composite video should clear that right up.

That's a pretty sweet little toy. I wonder why upscalers and such don't allow you to force the vertical axis to 5x integer scale. That way you could get perfect scanlines that were 2 pixels wide each, with 3 pixels of space between. Sure, you crop off a lot of the image, but everything that is cropped is still within the overscan area on a CRT. This would solve the problem of getting even scanlines at 1080p without letterboxing the image. I do this with the raspberry pi and use an overlay for scanlines.

Excellent review! Really appreciate that you took the time to put this up. I have the same NT as the review except it has the black controller ports. My NT had to be sent back to AI due to a faulty PPU. Now it works great. As far as the Everdrive N8 with 3.0 OS, I cannot get it to work correctly. Games will start and then freeze and/or display blocks of colors/numbers etc. Original games work perfectly, but I've read of Castlevania 3 having issues with the Kevtris HDMI and they are working on an update to fix it. I also read that Krikkz is working on fixing the Everdrive N8 compatibility with the HDMI NT. I've also read that the PowerPak works with the HDMI NT, but don't know if I want to purchase it just for the NT if Krikkz is going to put out a compatibility fix for the N8.

@Chris
Thanks! My pleasure :)

After reading your comment, I did some poking around and posted links to the relevant posts from KRIKzz and Kevtris in case anyone else is wondering the same stuff. If I were you, I'd hold off on the PowerPak untill we see what fix KRIKzz comes up with. I'm planning to buy an N8 for myself but not until I'm sure it'll work... By that time, I assume Kevtris will have his update out, too, so I'll actually have a way of flashing it :P